The Adventures of Asha'd (Origins) 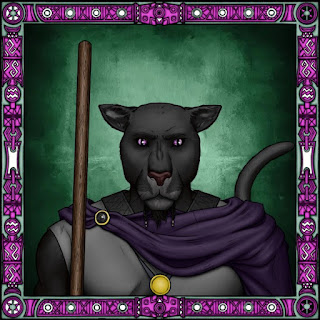 Asha'd is a Male Tabxi Sorcerer with a Darkling Background If you would like to see his particulars on his character sheet I will post a link below. I set out to create this character upon the invite to a D&D5e Campaign by my Friend John, The Campaign as it stands now is known as the Whitestone Keep campaign. These will be some of my accounts of my character's Adventures. To be honest as much as I have played D&D and its latest version D&D5e this will be the first time I actually Don't have to be the Dungeon Master and I get to play a character and enjoy the game from the player's seat. I am enthusiastic about the campaign as it is in a more open Sandbox style and the players are all Dungeon Masters in their own right and we jointly have input into the lore of the world we are creating along with DM Johns Guidance. So this first BLOG report is more or less sharing the background of Asha'd I hope you come along for the ride with me and see what adventures Asha'd finds.

I was born as part of theVoloni Clan to Zirra and Har’ad Deep within the Southern Jungles of Sandara. My mother Zirra gave birth to me in the Ruins of Kazrim which supposedly harbor a gateway to the regions of the Shadowfell. She hardly ever speaks of why she gave birth to me there other than she was helping my father in one of his pursuits when my time had come. Most of the young are born with the assistance of Tribal midwives in their homes, somehow this marked me as different throughout all my youth and to this day among theVoloni.

My father was hardly around always Following some adventures, or Magical Pursuits He had been Chosen by Tydus the Shadow God and possessed an affinity for casting spells that he says had come to him naturally because of this Prayers and Offerings to Tydus were quite common in my home this led to even more Distrust and Shun from my Voloni Clan.

Although I was the youngest, I have Two Older Sisters and a brother who embraced more of the traditional ways of the Voloni and seemed to thrive among the Voloni Tribe. My Mother and I much less it seems since my Birth, but my mother would affectionately call me her little Darkling and I felt closest to her as she often defended me against the scrutiny of Tribal Elders who referred to me as a cursed child.

At a young age, I found a had a sort of bond or vision with the Dead and Spirits from beyond this realm. I found myself speaking with Spirits and Ghosts even as a small child somehow, they would come looking for me many harmless, inquisitive, just wanting to be able to speak to someone again, others dark and foreboding seeking me out as somehow, I presented a danger to them. They always came to me from the shadows. My mother saw this and told me I was touched by Tydus and that I should keep it secret. Somehow hard as I tried many in the Voloni Tribe must have known they would always whisper and talk about me.

Through my youth and into my late teens I lived among the Voloni despite being marked as the Cursed Child. My Father would from time to time return and share his stories with me and he started teaching me some of his spells. He was aware of my abilities and soon I learned to send messages to him and my mother without speaking and tap shadow magics to change my appearance into visages of others in my tribe or spirits who have come to speak with me I kept it all secret till one day after my father had left on another adventure. A Spirit came to me in the night asking for help it was the grandfather of our Chieftain. The spirit was urging me to speak to his grandson and tell him he as displeased with how he was handling a matter within the tribe and its elders. The Spirit kept visiting and urging this to the point I could not get any rest.

One day my mother and I were in attendance of a tribal meeting when the Chieftain was Arguing with some of the Elders this spirit’s voice got so insistent in my head to speak out, I actually stood and shouted “Enough! Your Grandfather would not have treated the elders it this way!” The Chieftain turned and said “What do you know of My Grandfather Whelp? And how dare you speak to your Chief this way Cursed Child!” The next thing I knew his Claws lashed across my face Shadows Began to swirl around us and the next thing I knew I called on something dark within me and I called Dark Tendrils to wrap around the Chieftain's throat, Uncontrolled Anger led to surprise as I realized my dark grasp was not the Chieftain’s neck but that of my mothers who leapt in to interpose and defend me. Before I could control the anger, my mother had collapsed on the floor my fellow tribe members and even my brother and sisters were pelting me with stones and sticks and I was driven from the village.

I lingered in the Jungles living off what I could for days, spirits would find me and sometimes would be my only solace. I would even watch the village from a distance I learned that my mother fell ill. I did manage to use my magic to send her a message expressing my sorrow, she understood told me she loved me, and urged me to find my father she soon passed some days later. One of my sisters found me she warned me to not return the Chieftain has declared me and my father Outcasts to be Beheaded if caught near the Village it was only then I set out to find my father.

My Travels first took me to the Northern end of Sandara to the port city of Perdition I had been here on two prior occasions with my parents. The city is alive and ruthless if you remain ignorant so many spirits met untimely ends and even some undead below the streets. I quickly met others who had magic capabilities much like mine some called them gifts… As I tried to glean more information on my father’s whereabouts, I had taken up instruction under one such calling himself Vanis and referring to me as a Sorcerer one blessed with the gift of magic, I learned much but still felt as though Tydus had chosen me. I became a sorcerer because this Stranger saw the potential in me and did not look at me with disdain, he taught me how to control and channel my powers. Now I wanted to know why Tydus only speaks from shadows. Nobody really knows if Tydus is male or female. Why does he send the Dead to me? Why do they seek me?

One dark evening I thought I heard Tydus speak I heard him say “Shadows only mask part of a path, your path is your decision your action. Too many chose not to go ahead afraid of the shadows, Shadows are the same as uncertainty, be certain and they can be navigated do not cower from the dark or the unknown…” I did not know for certain if this was Tydus or some other spirit or soul speaking to me, but I vowed to use my talents to help others living or dead if they will accept me fine if they will not then hell with them. I know my soul has a dark side, but I will not let it get the best of me or determine my life.

My efforts to find my father did not prove as productive in the city of Perdition as my honing of the magical arts but I recalled Father's tales of the Goblin Wars on the border of the nation of Remulus. I concluded he must have taken a ship there, so I spoke to several captains and Befriended a Captain named Tiberius Cutler who my father had sailed a year earlier. So, I booked a working passage with the captain’s ship. That led me to a great City in Remulus. Tips and hints to my father’s whereabouts were far apart but fruitful as not many of my kind are here, they have led me to a place people in Remulus call a frontier town or border town near where much of these supposed Goblin wars took place. Perhaps I can find him here or at least a lead it has been nearly 3 years since I have seen his face will he recognize me as his whelp of a son Asha’d or is he even alive?

Arcane Origins: Your power arises from your family’s bloodline. You are related to some powerful creature you inherited a curse.

Reactions: your Neighbors hate and fear your power, causing them to shun you.

Supernatural Mark: You bear the scar of an exile over your left eye that classes over in a dark blue cloud when you sleep or channel your powers. (Two Claw Slashes)

Signs of Sorcery: For a moment after you cast a spell, the area around you is cold with dark wisps of shadows (visible breath)

Quirk: When Asha’d sleeps he does not appear to be breathing (Though must still breathe to survive)

The Crafty DM
Avid Gamer and D&D player since its creation, Served in the United States Marine Corps, Retired from United States Postal Service. I am Married now for 33 years enjoy and love to BBQ, and home brew beer and travel with my wife. I like creating things with my hands and my imagination actively making digital maps for Virtual Tabletop Play. https://ko-fi.com/craftydm